The Canadian government is not living up to its promises to re-engage in UN peacekeeping.  By May 2020, it had reached the lowest level of personnel contribution since 1956, in part due to the COVID-19, but also because of a poor position to start with.

The air force contribution in Mali in 2018/19 was substantial and valued by the world organization but it lasted only one year. A new means of aerial transport assistance has been established, which is also to be commended, but it is only one C-130 tactical aircraft for 5 days of UN service a month; NATO missions in Iraq and Latvia clearly have priority.

While the Air Force has made an increased contribution, the Canadian army has not. It has not rotated troops in UN peacekeeping since the last century. While it provided seven force commanders for UN missions in the 1990s, none have been provided since. Canada is far behind its contributions of the past, in terms of numbers, leadership and hardship. It has not yet re-engaged in UN peace operations, as promised. The Trudeau government is providing FEWER peacekeepers than the Harper government did (averaging over their terms in power). Maybe with a deployment of the long-promised QRF in the near future, Canada might once again make a strong contributions to the United Nations but will it be a sustained contribution? The record of the Trudeau government makes that quite doubtful.

The government’s October 2018 self-evaluation that fulfilment of its peacekeeping promises is “on track” was inaccurate, if not outright false. The government’s downgraded self-evaluation of “actions taken, progress made” (starting January 2019 and continuing to October 2019) was more accurate but also indicates how far the reality is from the promises. Only one mission has been added by the Trudeau government since 2015: the Mali mission but this support function was provided for only one year (with a one month extension of the aeromedical component).

Ironically, the same month that Canada hosted a peacekeeping pledging conference (Vancouver, November 2017), the number of Canadian uniformed personnel in UN peacekeeping was lower than at any other point since the creation of the first peacekeeping force in 1956. It decreased even further in the months afterwards (to 40 in May 2018 and then to 35 in April 2020). Even with the increase in Mali (July 2018 to August 2019), the average monthly contribution of the Trudeau government since it assumed power in 2015 is still less than that of the previous government: on average, 114 uniformed personnel for the Trudeau government 2015-19 and 157 for the Harper government, 2006-15.

The Mali deployment did not signal a “re-engagement” in UN peace operations since the deployment of the aviation task force was relatively short-term (one year plus one month for the aeromedical component) and was not renewed. As noted, Canada announced on 19 March 2018 that it would provide the UN mission in Mali with an aviation task force of 6 helicopters and an aeromedical team. The deployment came to 8 helicopters after negotiations with UN headquarters. This substantial contribution became fully operational in August 2018 but the commitment was of short duration (less than the countries that preceded Canada). Furthermore, it was not a complete replacement for the German capability that was withdrawn in June 2018 after one-and-a-half years of service. And even with the Mali contribution, Canada’s maximum contribution during Trudeau’s term was just one-third (roughly) of Canada’s pledged military contribution (up to 600 personnel). Furthermore, the promised Quick Reaction Force is not deploying quickly, taking over 18 months since it was pledged with no deployment date (or place) in sight. Similarly, a new mission for Canadian police contributions has not yet been announced, though the number of police in Mali has increased. During Trudeau’s term, Canada reached the lowest police contribution since 1992 (15 personnel in November 2018) but has increased since (to 27). For the promised deployment of C-130 (Hercules) aircraft to Entebbe, a creative proposal to serve multiple UN missions, the UN-Canada MOU took almost two years to negotiate.  Though August 2018 was the expected deployment month for the service, the agreement was not reached until a year later. With the Air Force making the majority of the UN contribution, the Army has been left in limbo in peacekeeping, having deployed no units to UN operations during Trudeau’s term.

Canada is now doing better on on deploying women in peacekeeping, 25% of deployed Canadian uniformed personnel being women, according to UN stats. But the total number of women deployed has fallen precipitously in September 2019 (UN numbers not yet released for 31 September), after the end of the Mali mission. Outside of the Mali mission, only 5 military women are deployed in peacekeeping operations.

The Trudeau government is not “back” and it is certainly not on track to meet its promises. Canada has not re-engaged, though a substantial commitment was made with the one mission in Mali. The rhetoric remains lofty on paper and in speeches but the Canadian government has yet to match its words with deeds. Canada is not leading by example and has defaulted on its own advice to the world: “The time for change is now and we must be bold” (Minister Sajjan’s speech to UN Security Council, 28 March 2018, copy).

Next page: References
Return to Tracking the Promises 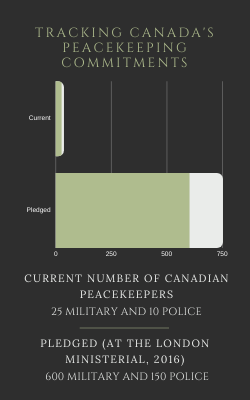