In the past, Canada provided great contributions to the evolution of UN policies and practice, with the creation of the first peacekeeping mission (UNMOGIP, 1948) and especially the first peacekeeping forces (UNEF, 1956 and UNFICYP 1964). Later it led in the development of the concepts of Responsibility to Protect (R2P, 2001), the Protection of Civilians (POC, 1999) and human security more generally. It also helped pioneer the use of panels of experts for sanctions monitoring (e.g., Angola 1999), which often happen in conjunction with peace operations.

During the tenure of the Harper government, no intellectual initiatives were undertaken, even as the UN made tremendous progress in developing POC, peacekeeping-intelligence, as well as better training and equipping of peacekeepers. The Trudeau government made a major contribution in one area: child soldiers. Thanks mostly to the work of the Romeo Dallaire Child Soldiers Initiative, the Vancouver Principles on “Peacekeeping and Preventing the Recruitment and Use of Child Soldiers” were adopted at the 2017 Vancouver ministerial and have been endorsed by over 80 countries. The contribution to Women, Peace and Security has been more by example (percentage women deployed in 2019) and financial contributions than by intellectual contribution. In the area of peacekeeping technology innovation, Canada did provide the UN with one gratis personnel for one year (Walter Dorn, 2017-18), who served as the UN’s Innovation and Protection Technology Expert.

Conclusion: With the exception of the Vancouver Principles on child soldiers and peacekeeping, led by the non-governmental Dallaire initiative, little or no intellectual leadership in peacekeeping has been shown by the government.

Next page: Government’s Self-Evaluation
Return to Tracking the Promises 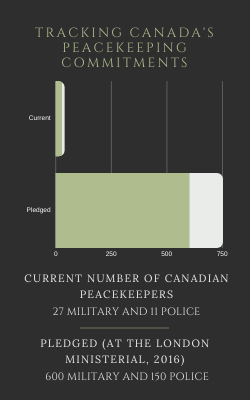