Canadian Broadcasting Corporation, “Canada offering 200 ground troops for future UN peacekeeping operations,” http://www.cbc.ca/news/politics/peacekeeping-plan-trudeau-vancouver-1.4403192, 15 November 2017. Trudeau Quote from Ministerial on 15 November 2017: “We are making all these pledges today, because we believe in the United Nations and we believe in peacekeeping,” he said. “What we will do is step up and make the contributions we are uniquely able to provide.”

Return to Tracking the Promises 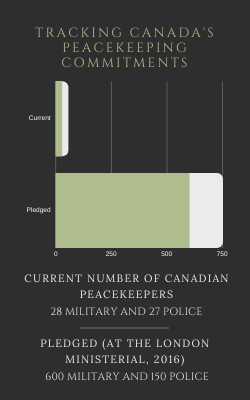